< Back to Operations Evaluation Group

In times of crisis or conflict OEG augments its field staff, sending additional analysts to on-scene posts. During these deployments OEG analysts help commanders conduct operations more effectively and safely. They are also responsible for identifying issues requiring post-conflict analyses and for collecting data to support those efforts.

Stories from the Field

Through its Field Program, CNA's Operations Evaluation Group and Marine Corps Program keep dozens of analysts assigned to Navy, Marine Corps, and joint commands at all times.  CNA has supported Navy and Marines leaders in every conflict since World War II. Click on a CNA staff member to read their story.

In Operation Iraqi Freedom, CNA Field Representative Annemarie Randazzo-Matsel (on left in photo) deployed with Expeditionary Strike Group 3 to the Northern Arabian Gulf. She was aboard the USS Belleau Wood to provide on-site analytical support for operations and the then-new concept of Expeditionary Strike Groups as a whole. One of the strike group’s primary responsibilities was to defend oil terminal platforms against any attack, including small boats. In July 2004, Randazzo-Matsel accompanied Brigadier General Joseph Medina (right) to the Khor Al Amaya Oil Terminal to meet with troops and discuss oil platform security operations. 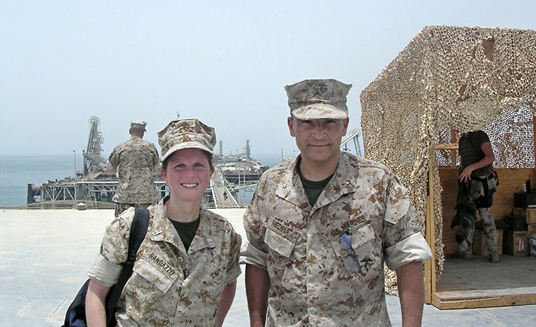 In 2015 and 2016, Dr. Anna Williams was the CNA field representative to Carrier Strike Group 3, based on USS John C. Stennis. During a predeployment certification exercise in the Eastern Pacific, Williams flew in a Seahawk helicopter from the aircraft carrier to destroyer USS Chung-Hoon. There, she gathered data to analyze how maneuver and other measures affect the ability of ships to avoid attack by submarines. And to get a feel for what it’s like to steer a 9,000 ton ship, she was given a chance to take the helm (right). 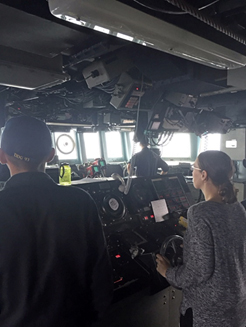 CNA Field Representative Dr. Robert Trost (in blue) with Dr. Chris Heagney of the Office of Naval Research, above the spherical reflector dish at Puerto Rico’s Arecibo Observatory. Trost toured the facility while observing experiments on the effects of ionospheric scintillation — variations in electron density that can distort radio waves. His research was part of a collaboration between Fourth Fleet, the Naval Research Laboratory and CNA on relocatable over-the-horizon radar. The results were used in several Navy programs 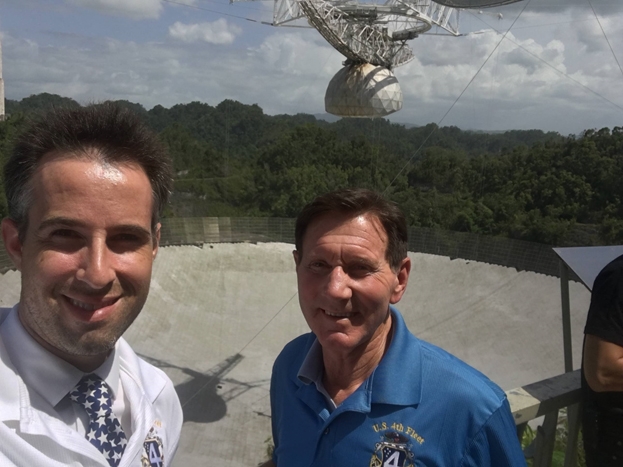 Dr. David Broyles was part of a CNA team conducting data analysis to help the U.S. military counter improvised explosive devices (IEDs) by using electronic warfare techniques. Broyles was deployed to Joint CREW Composite Squadron One at Camp Victory in Baghdad, Iraq. His work there analytically showed a shift in IED tactics at a time when the devices were responsible for about half of U.S. troops killed in Iraq. Broyles posed for this photo while visiting Camp Victory’s “tank graveyard.” 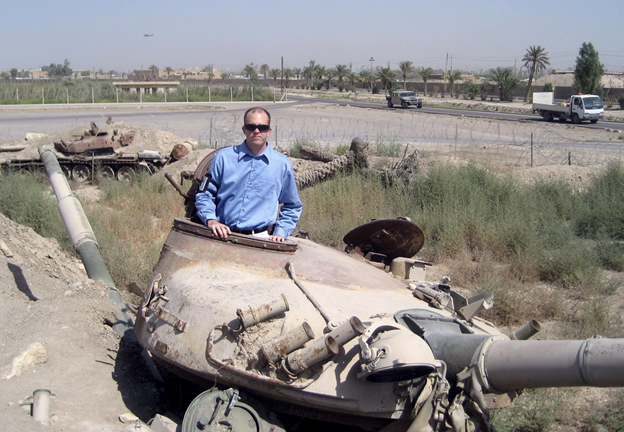 CNA Field Representative Dr. Diane Vavrichek flew on a British helicopter to the HMS Kent, a Royal Navy frigate, in the Arabian Gulf. There, she studied the integration of unmanned aerial systems into coalition operations. At the time, she was on a two-year deployment to Carrier Strike Group 1 aboard the aircraft carrier USS Carl Vinson. 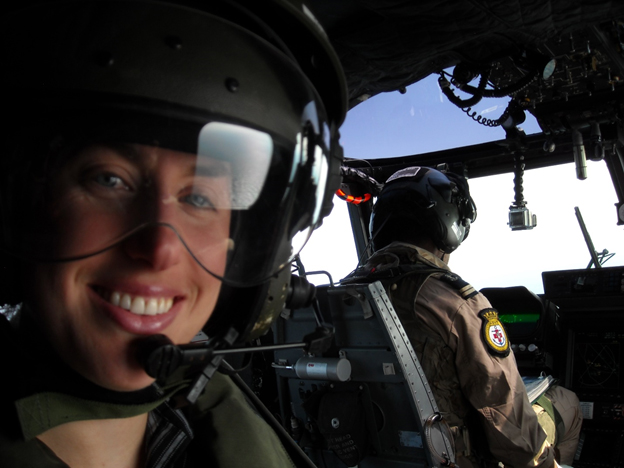 In the months after Saddam Hussein invaded Kuwait in 1990, 22 CNA field representatives traveled to the Persian Gulf region for the analysis of Operations Desert Shield and Desert Storm. Four of them appear in this photo, including Dr. Katherine McGrady (center), who today is the president and CEO of CNA. They would soon disperse: McGrady to the front with I Marine Expeditionary Force, Dr. Marvin Pokrant (left) to USS Blue Ridge as the field representative supporting the commander of coalition naval forces, and Dr. Bill Morgan and Doug Skinner (both right) to the port of Al Jubayl to monitor to the offload of maritime prepositioning forces ships. With them also was Marine Lieutenant Colonel William “Clay” Grubb. McGrady remembers this last get-together before the war as “a nice moment to flock with your own.” 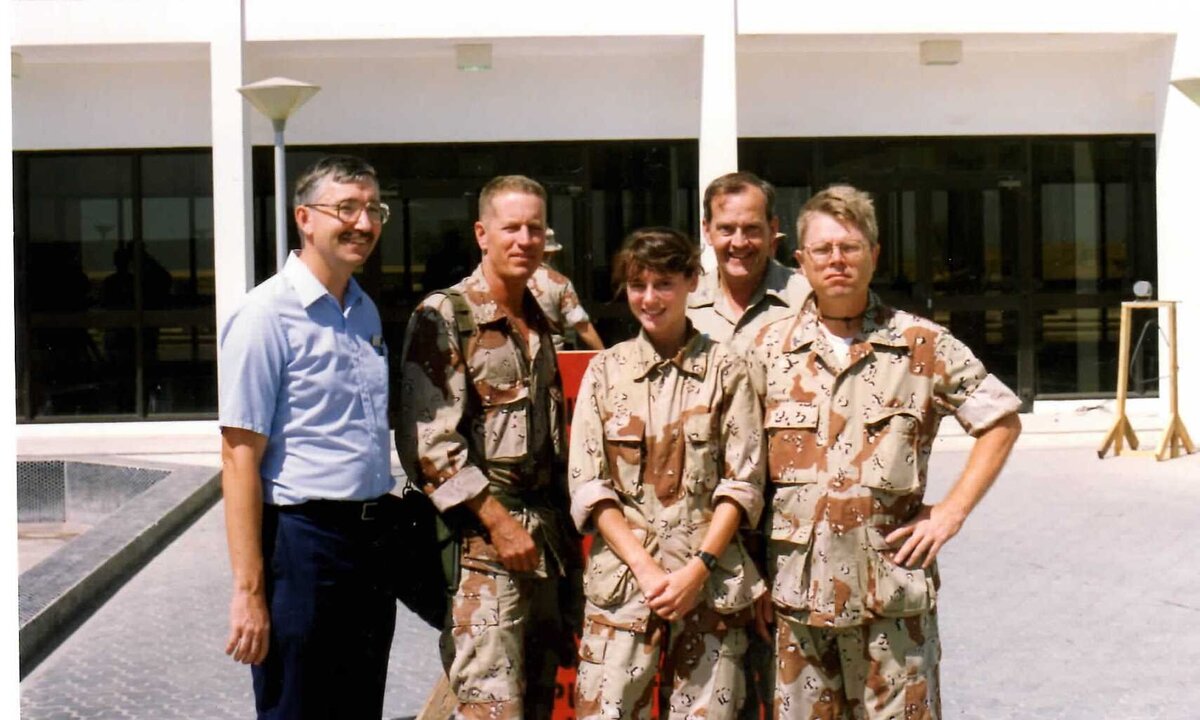 CNA analyst Dr. Mallory Ladd (on left in photo) joined Marine Corps forces in Norway for Exercise Cold Response 20 in March 2020. The tactical field training exercise involved some 15,000 personnel from 10 countries. Ladd, who already had experience working in the Arctic as a scientist before joining CNA, gathered data on the challenges of training for combat in a harsh environment — something she experienced herself. “The only way I was able to keep up with the Marines when cross-country skiing was that they each had a 50-pound pack, while I was only carrying my notebook and pencil,” she says. Recently, Ladd was the CNA field representative to Carrier Strike Group 1, on USS Carl Vinson. 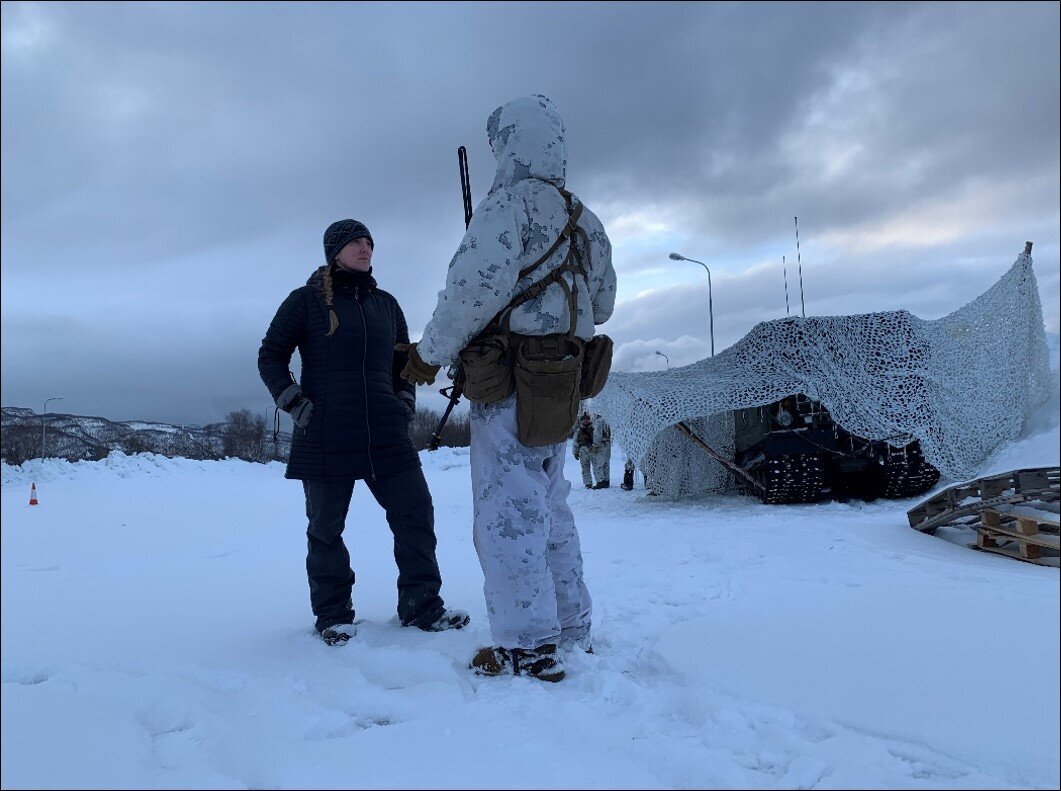 Dr. Sara Russell was the CNA field representative to Carrier Strike Group 2 for the maiden voyage of aircraft carrier USS George H.W. Bush. It was also the first time EA-18G Growler electronic warfare jets had deployed with a carrier strike group. So some of Russell’s analytical tasks covered Growler maintenance and real-world mission capabilities in support of operations in Afghanistan. For a truly realistic assessment, she flew a 90-minute training sortie in the electronic warfare officer's seat of a Growler, experiencing a dry refueling and a dive to identify a ship. Russell likens being catapulted off the carrier to “something out of a Star Trek movie when going to warp drive.” 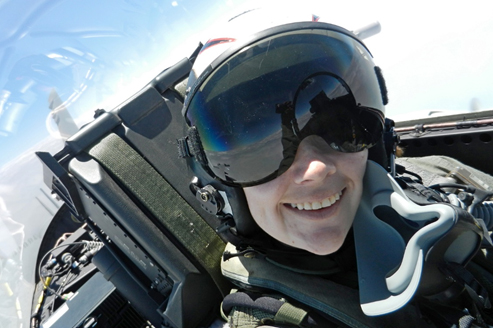 CNA analyst Dr. Nolan Noble was aboard aircraft carrier USS John C. Stennis, working together with two CNA field representatives to collect data on Undersea Warfare Exercise 2016. His task was to observe the decision process between potentially conflicting antisubmarine warfare tactics and maneuvers. He split his time between electronic monitors, vulture’s row above the flight deck, and the bridge. In this photo, he has boarded a Seahawk helicopter to fly between ships in the carrier strike group. 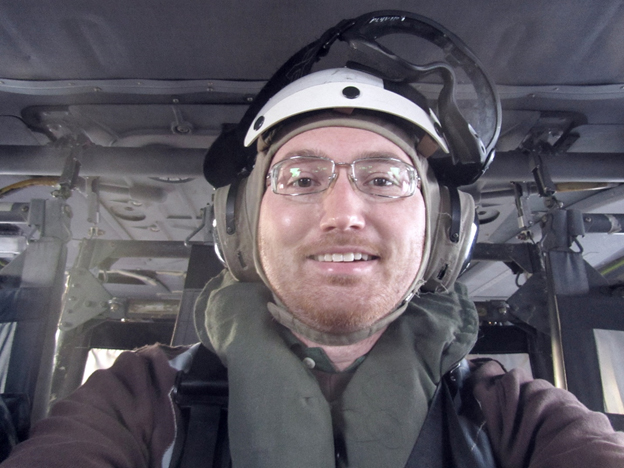 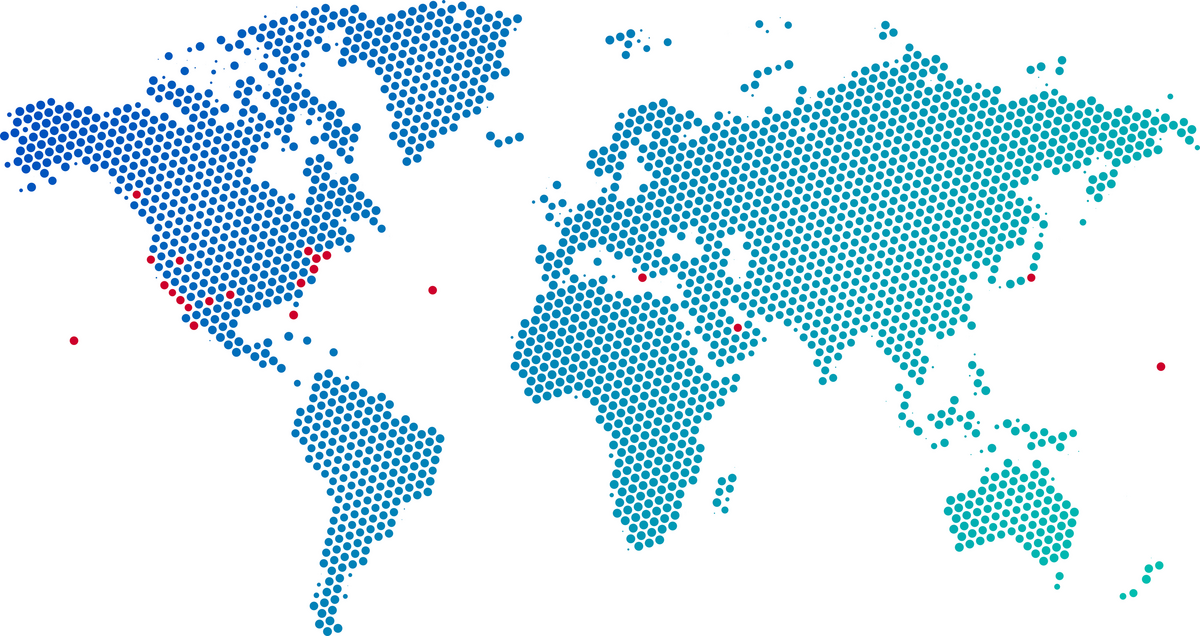 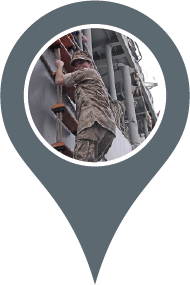 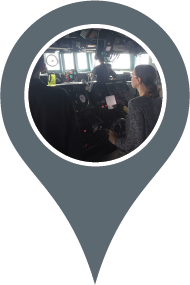 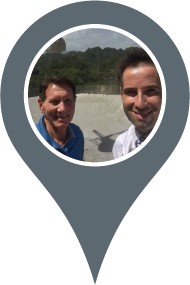 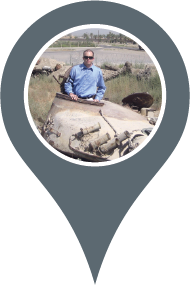 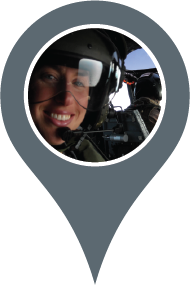 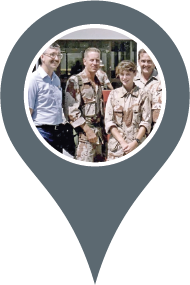 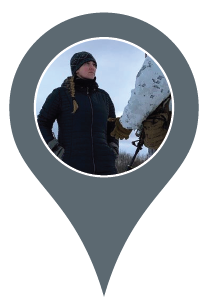 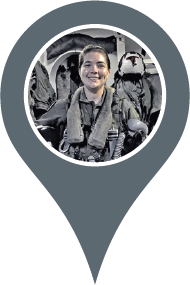 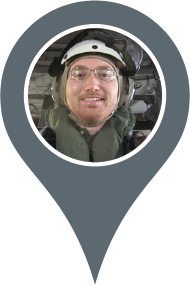 < Back to Operations Evaluation Group