New Roles for Civil Affairs Forces in a New World

The armed forces of the United States have engaged with civilian leadership, institutions and populations throughout our nation’s history. Today, we know these activities as civil military operations, typically conducted by civil affairs forces. They are traditionally employed following the conclusion of major combat operations, in the period of transition toward stabilization. We saw this most recently in Afghanistan, where civil affairs forces worked extensively with local institutions and personnel to help restore order to civil society, rebuild, and grow lasting relationships with civil actors. Today, however, the military is contending with a shift in policy priorities to focus on strategic competitors like China and Russia. President Biden recently signaled this continuing change, saying that the United States is “ending an era of major military operations to remake other countries.”

What, then, can we expect from civil affairs, given the typical use of these forces has been on “remaking” efforts like those in Afghanistan? Rather than portending an end to the need for civil affairs forces, strategic competition should prompt us to think about new and creative uses for this unique skillset.

Today’s civil affairs forces belong to the U.S. Army and U.S. Marine Corps, numbering about 15,000 personnel, along with a contingent of over 1,200 soldiers under U.S. Special Operations Command. Together, these civil affairs forces support relationships with allies and partners through theater security cooperation, disaster response and other, largely peaceful efforts not tied to armed operations.

Although these capabilities have seemingly wide application, current guidance does not yet reflect a full exploration of where and how to employ civil affairs forces in strategic competition with a near-peer like China or Russia. For example, in the 2018 Joint Concept for Integrated Campaigning , the Joint Chiefs of Staff accept that the United States is not well suited for operating outside of a war-peace duality, and propose a continuous campaign approach for operating within a competition continuum. While there are clearly opportunities for civil affairs units to contribute within that continuum — between cooperation and armed conflict — the document does not explicitly mention civil affairs. We see similar omissions in service-level concepts, such as the Army’s Multi-Domain Operations and the Marine Corps Force Design 2030 . 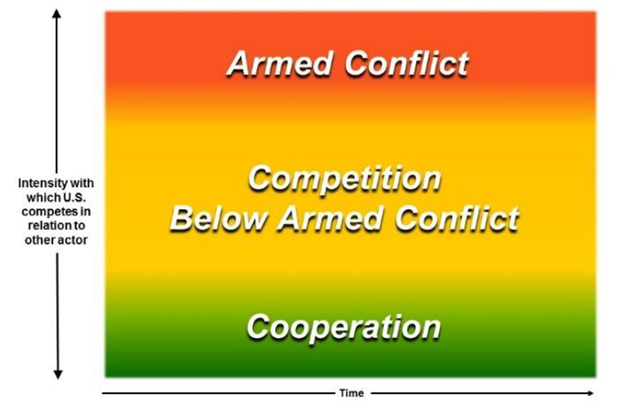 Civil affairs forces have an enduring and natural role in cooperation. The joint doctrine note points out that cooperative activities involve U.S. and partner-nation forces working toward shared policy objectives and may include “security cooperation activities, multinational training and exercises, information sharing, personnel exchange programs and other peaceful military engagement activities.” These constitute the bulk of U.S. military day-to-day operations outside of conflict zones.

An example of civil affairs in cooperative efforts might involve engaging partner nation local governments, civil aviation authorities and port authorities in support of military training exercises. These events often require coordination with civilian government personnel to ensure that the activities of the forces involved comport with local laws and regulations and are not disruptive to the local economy. Civil affairs forces serve as a natural bridge among the interested parties.

Competition below the level of armed conflict

The role of civil affairs in competition below the level of armed conflict could include support to proxy forces, foreign assistance to grow civil institutions in partner nations, or civil reconnaissance operations. For civil reconnaissance, civil affairs forces could conduct operations to map civil institutions, gathering and tracking information on these key players and monitoring for changes over time. They are also well-positioned to liaise with them where necessary to gain additional insights to help U.S. forces achieve their objectives.

Civil affairs forces sustained and utilized in more novel roles in cooperation and competition would still be available for their traditional roles at or near the end of armed conflict: to conduct stability operations and rebuild civil institutions following the cessation of major hostilities. There is potential for these forces to leverage prior investments in cooperation and competition to improve outcomes following armed conflict. The information they would have gathered and relationships they would have built would likely prove valuable to rebuilding efforts and possibly add to the integrity of civil institutions as U.S. forces withdraw.

In sum, civil affairs forces present great potential for helping the United States to compete effectively this new strategic era, across the competition continuum. Realizing this potential requires considered and creative attention to the conceptual employment of civil affairs forces, followed by concrete steps to leverage this unique capability across a range of activities and challenges.

Emily Mushen is a research scientist in Countering Threats and Challenges at CNA with 15 years of experience in analysis of irregular warfare, influence operations, and counterinsurgency. She has conducted several studies on civil affairs activities, force structure, and impact for the US Marine Corps.